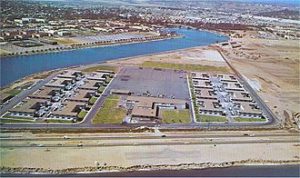 I was stationed at the Boot Camp in San Diego, California. My sister had sent me a bible and I didn’t think anything of it. I didn’t know that she had become a Christian a year earlier. Her and her friends had been praying for me during that time and while I was in boot camp.

As you can imagine, bootcamp can be quite a trying time for most all recruits. It doesn’t just take a physical toll on you, but a mental one too. Learning to take orders without question and loose your identity and getting knocked a few pegs down on a daily basis is tough.

One particular day I was having a tough time. When we got a break, I couldn’t stand sitting in the small break building with 40 guys smoking. I couldn’t see through the room or even get a breath. I grabbed the Bible my sister had sent me and I went out and sat under a tree to think. I opened up the Bible to an Old Testiment story where three armies met to fight and a dense fog set in. The two armies who had joined to fight one army couldn’t see and fought and killed each other off. One army was not harmed. I remember thinking, wow, that God kills everyone. I shut the Bible and went back with the other guys.

A few days later, I had another tough day and went back out to the tree with the Bible and thought lets try this again! I opened up to the New Testiment this time to the book of Matthew. The book opened to a passage that was about to change my life forever. Three sentences changed my life. I read, “Jesus said to the fishermen, Come follow Me. They put down there nets and followed him.” After reading that, I remember looking up to the sky and saying “If you want me, you can have me too.” I had know idea what I had just done. I didn’t know I had just become a Christian. Those were the only verses I had read.

My life changed that day under the tree and the journey of faith took off like a rocket. Things started to happen in my life that I had no idea of what was going on. What I did know was that at the name of Jesus, the devil had to bow down. That day I first believed I was filled with power and strength. The Holy Spirit flooded my being. I had a mustard seed faith, the faith of a child. I didn’t know anythig else but what I was reading every day in my bible. I didn’t have any teacher or mentor, just the Word, and it set me free. It was life to me and I drank it in. I began to understand things that were sound teaching without any person teaching me. The Holy Spirit taught me. I just knew that I knew that I knew and that was all that mattered. I didn’t care what anyone thought. It took me through my time in the Navy without giving in to all the temptations simply because I did what God said we were to do. To me Christianity was a simple life and filled with peace and less regret.