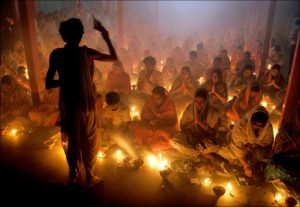 When people hear “Jehovah’s Witness” they instantly think of the nice folks that go banging on doors super early on Saturday mornings. Most people, however, never take the time to consider the name Jehovah. In fact, there are Christians that probably don’t even know that Jehovah is one of the formal names given to God. It is mentioned in all forms and versions of the Christian Bible. To be more specific, it is mentioned in one of its many forms. In ancient Hebrew it was written as YHWH. Since there were no vowels in that language it was later assumed that God’s name was pronounced Yahweh. There are some spellings that are even shorter, for example: YHW.

These spellings and pronunciations lasted until the 16th century AD when some scholars believed they may have added the vowel incorrectly and reformed the saying and spelling of God’s name to Jehovah. Yes, the God that Jehovah’s Witnesses worship is the same as your (and my) Christian God.

Q: Why haven’t I heard the proper name of God more often and why isn’t it spelled out more often in my Bible?

A: Over the years, when the Bible was being translated or printed, the name of the Lord was changed to “God” or “Lord” because it was thought using the proper name of God/YHWH/Jehovah may be disrespectful or show insolence.

The problem with this tact is that God’s name has been washed away with time and that has stripped identity for some followers or even potential followers. In place of a proper name people have referred to God as “The God of Abraham”, “The God of Israel”, “The God of Moses” or “The God of David”.

Since the dawn of monotheism (when humans began to believe that there was one God), the name YHW has been prominent and ever-present. Texts have people of Egypt and Jordan writing about YHW as far back as 1200-2000 BCE. May I remind the reader that this is referring to surviving texts only. It is unknown what year on our current calendar that people first began following the true God. There are many of today’s scholars that put that year at 3000 BCE – 5000 BCE but there is truly no way to know this.

Other spellings for our God are: JHWH in German, French and Dutch, and either YHWH, YHVH, JHWH or JHVH in English.